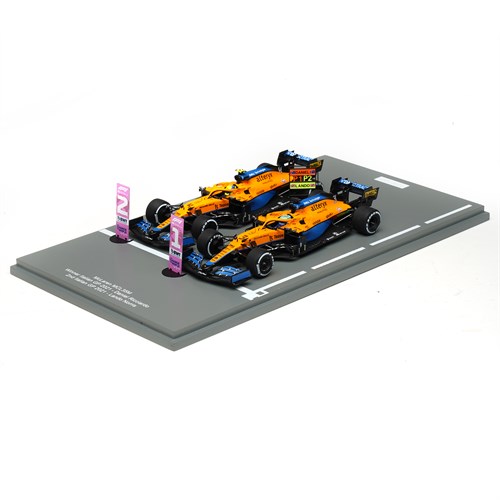 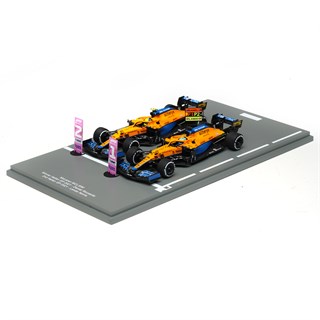 Spark 1:43 resin model two-car set of the #3 McLaren MCL35M as driven to victory by Daniel Ricciardo and the #4 McLaren MCL35M as driven by Lando Norris to second place in the 2021 Italian Grand Prix. The 2021 Italian Grand Prix was without doubt one of the most dramatic races of the year. Title rivals Max Verstappen and Lewis Hamilton had their second major collision of the season, which left the Dutchman’s Red Bull sat atop the Englishman’s Mercedes in the gravel trap at the first chicane. Ricciardo was already ahead of them before that incident however, and he went on to take his first victory for three years, which was also McLaren’s first success for nine seasons. With team-mate Lando Norris following him home in second place to seal a 1-2 finish for the Woking squad, it truly was a joyous day for the outfit. Spark’s 1:43 two-car set comes complete with the first and second place marker boards that Ricciardo and Norris pulled up in front of after the race, as well as the celebratory pit board that the McLaren team made up to celebrate the result. It is also an individually numbered limited edition of just 1,000 pieces worldwide.
Read more