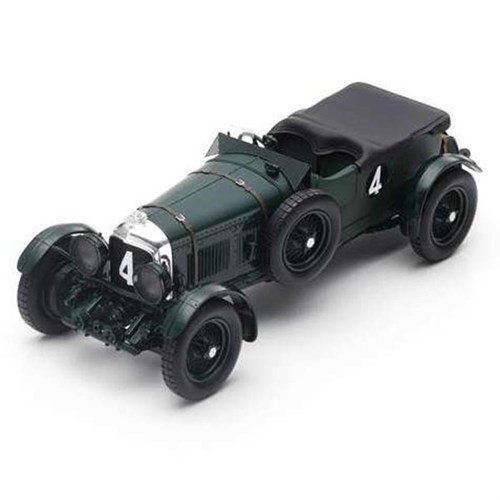 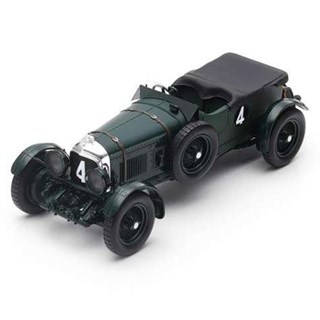 Spark 1:18 resin model of the #4 Bentley Speed Six as driven to victory by Woolf Barnato and Glen Kidston in the 1930 Le Mans 24 Hours. This car has never been replicated in 1:18 scale before.

Only 17 cars started the Le Mans 24 Hours, the smallest grid in the history of the event, as the effects of the Great Depression were still being felt. It was still a high quality field, though, with a pair of Bentley entries (Tim Birkin's Blowers and the works Speed Sixes) taking on efforts from Mercedes and Alfa Romeo.

The start of the race saw the two Blowers battling with the mighty 7.0 litre Mercedes of Rudolf Caracciola. However, none of these cars were destined to make the finish, and the demise of the Mercedes shortly after midnight left the Speed Six of Barnato and Kidston had with a comfortable six lap lead, which it was able to maintain to the finish.

The victory marked Bentley’s fourth consecutive victory in the great endurance event, and it’s fifth overall. It also allowed Barnato the incredible distinction of a 100% success rate in his three starts in the race!

Now, it won’t surprise you to hear that this replica is already going down a storm with collectors. It is one of the most significant cars from the history of motor racing that has not yet been replicated in 1:18 scale. And, although Spark will soon be righting that wrong, demand is going to be huge, and could well exceed supply. Get your pre-order in quickly, and you will not miss out. Procrastinate, and we will not be able to make the same promise.