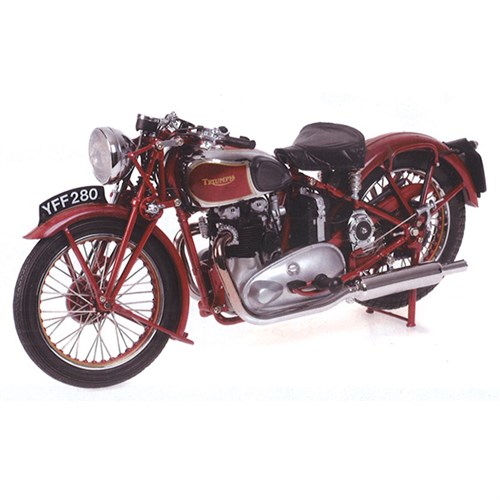 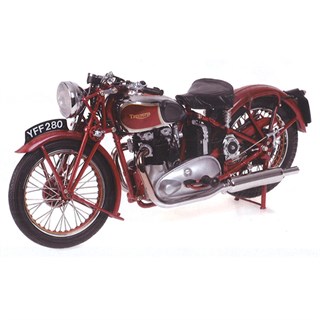 Minichamps 1:12 diecast model of the 1939 Triumph Speed Twin in red. When Ariel took over Triumph in 1936, Edward Turner, who had recently designed the ‘Square Four’, became Triumph’s new head of design. He was convinced that two cylinders were better than one, and so set about creating a machine that would have an advantage over the single-cylinder machines that had dominated motorcycle production until then. When the bike was launched in late 1937, it was a huge hit. Its top speed of over 90 mph could perhaps be matched by the best singles, but they could not compete with its smooth power delivery. Or its handling. The Speed Twin had created a revolution, and was the major influence on Triumph’s machines throughout the fifties and sixties. This is one of the most intricate replicas that Minichamps has ever offered, with its fine spoked wheels and delicate cabling. A particularly neat feature is the coloration on the exhaust, which is shown as a browning at the top end of the pipes as they come out of the cylinders. It’s a nice touch.
Read more