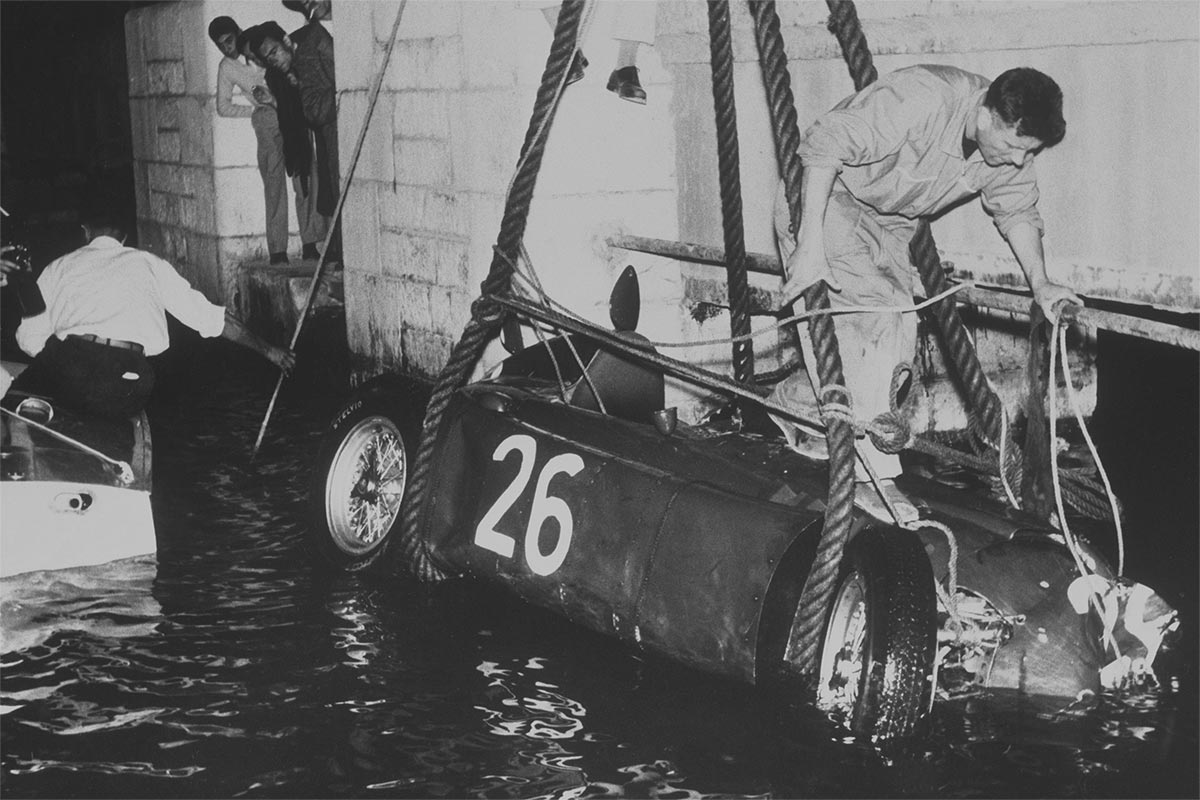 CMC announced its Lancia D50 project at Nuremberg in 2016; it’s a subject that has never before been modelled in 1:18, and in our opinion it is exactly the kind of subject that CMC excels at.

The D50 was a technical tour de force; in many ways it was more advanced than the W196 of Mercedes. The four-camshaft V8 was used as a stressed member in combination with a tubular space-frame chassis. The engine was offset so the propeller shaft could run down the left side of the cockpit. But visually the most striking aspect of the car was the twin pannier-type fuel tanks located on fixed outriggers between the wheels.

These fuel tanks were designed to meet two specific objectives. Firstly, they allowed for better air flow between the wheels, thus reducing drag. But secondly they helped maintain constant weight distribution as the car consumed fuel. The output of the V8 was a reputed 260 bhp; this was perhaps a little higher than that of the Mercedes, but the Lancia weighed 280 lbs less. 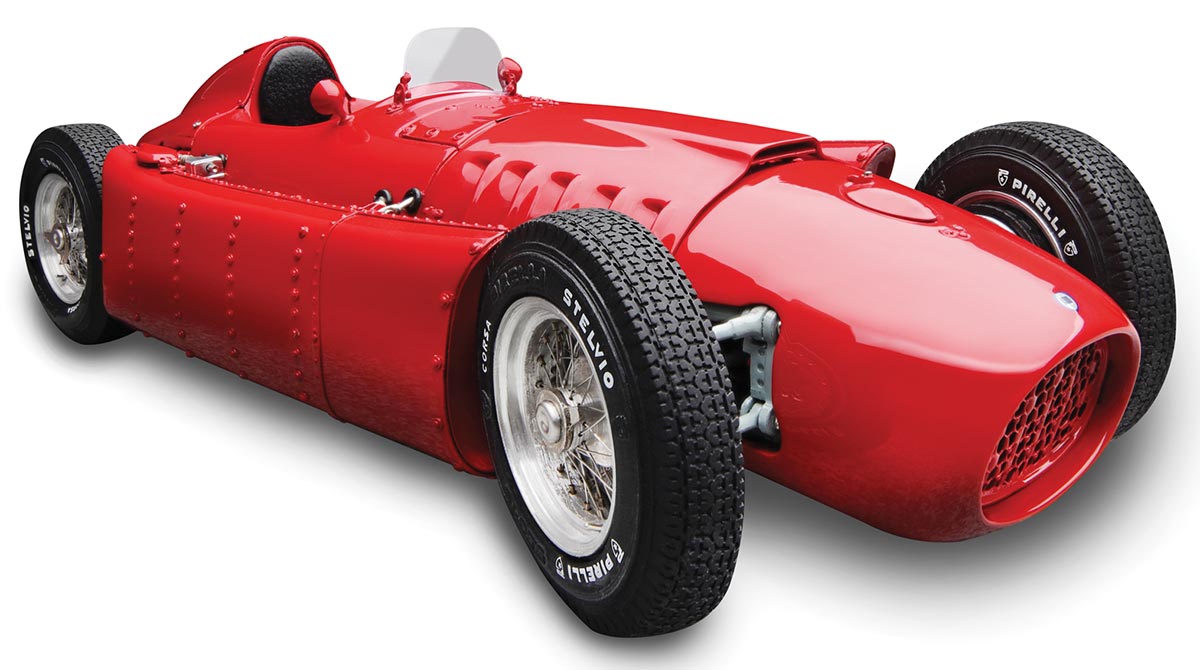 With huge ambition, the team signed top Italian driver Alberto Ascari. Ultimately, the car was not ready to race until the last round of the 1954 season in Barcelona. The Lancia was fastest in practice. In the race, Ascari took the lead on lap 3, setting the fastest lap, but eventually had to retire with clutch problems.

In 1955, the Lancias were very much in contention, vying with the Maseratis, Mercedes and Ferraris. In Monaco, Ascari famously crashed his car, and plunged into the harbour. He was unscathed, but died tragically four days later in a sportscar accident.

The loss devastated the Lancia team; financial pressures added to the family’s woes, and so the controlling share was sold to Fiat, who passed the assets of the team to Ferrari.

CMC’s first replica of the D50 is the car in plain red.

The car that Ascari was racing at Monaco in 1955 will be released early(ish) in 2018, but this version of the replica has already sold out to pre-orders. The car will wear the 26 number that Ascari raced with that day. It is a limited edition of 1,500 pieces. The other car that will follow on quite shortly after this is the number 30 car driven by Ascari’s team mate Castellotti at Monaco. In that race he scored his best ever result, with second place.

CMC uses real leather, wood, rubber, aluminium and stainless steel to achieve the kind of realistic and authentic finishes that you will never achieve with plastics and other synthetic materials. To assemble the car takes approximately seven hours of a skilled model maker’s time, which is no surprise given that just short of 1,600 parts are required.

On the D50, the engine hood is lockable, and can be detached, the hinged screen is adjustable, whilst under the bonnet the engine in its own right is of display quality, with all the required pipes and cabling present and correct. 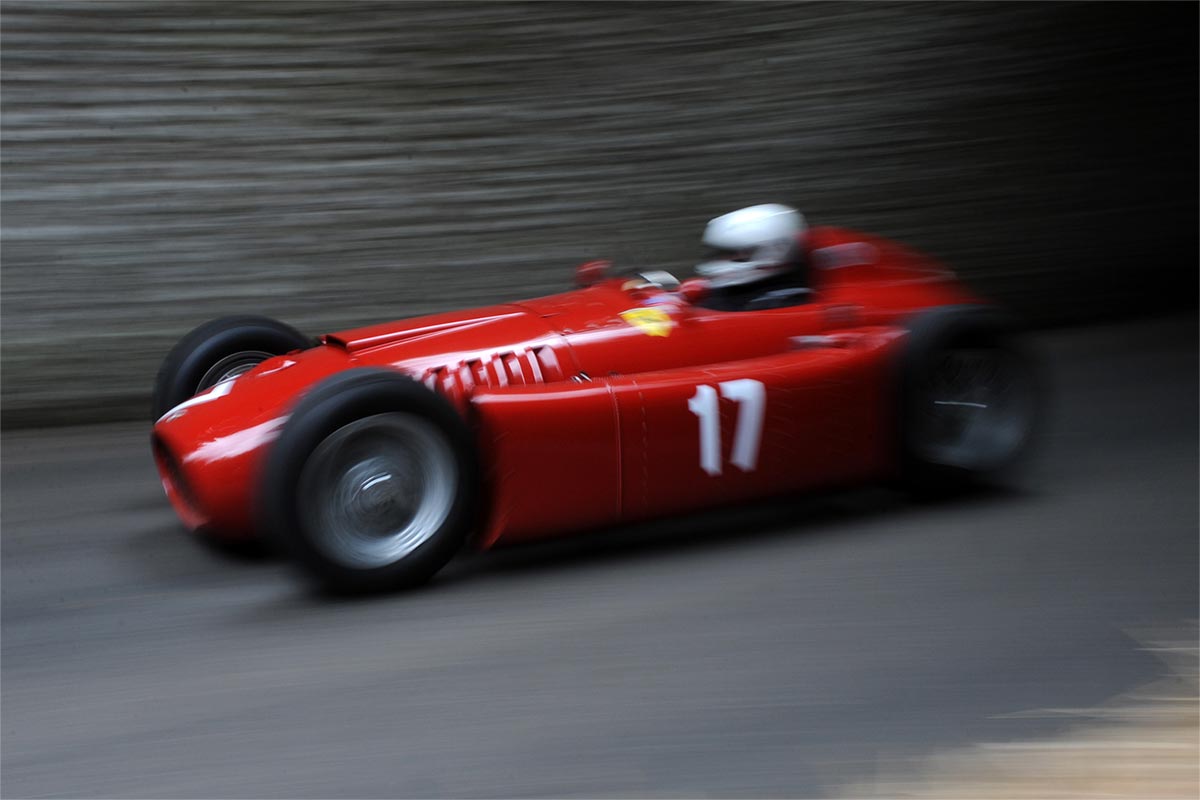 Almost all the suspension and steering on the D50 is made from metal: the steering axle, shock absorbers, front wishbones, transverse leaf springs, longitudinal arms, inboard dampers, rear suspension De-Dion tubes, and so on. Likewise the exhaust pipes and radiator grille. The original car’s fuel and oil cooling systems are all fully replicated. The fuel and oil caps are hinged. In the cockpit, the seat and headrest are upholstered in real leather.

You can often tell the quality of a replica by the amount of effort that has gone into getting the wheels right, and on the D50 they are perfect, with hand-laced, stainless steel spokes and nipples on alloy rims. The wheels are held in place with authentic right and left hand threaded spinners.

Some CMCs sell out on release; some don’t, but few of the company’s subjects will have had the universality of appeal of the D50. This is a Lancia; a Lancia that became a Ferrari. It is a car driven by legendary drivers like Ascari and Fangio. And it is a championship winner that has never been modelled before. We suggest that you get your order in soon.