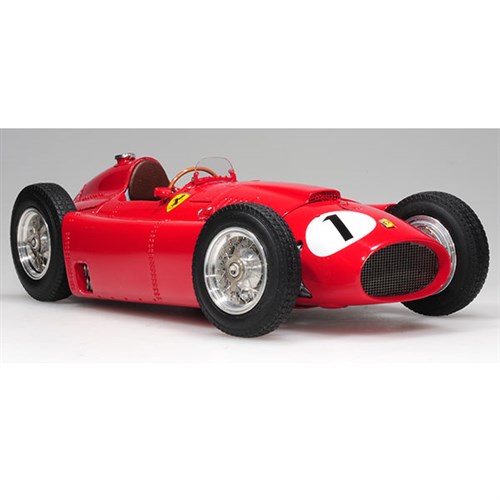 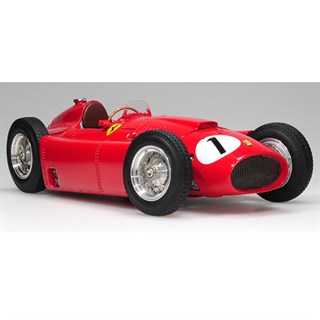 CMC 1:18 diecast model of the #1 Ferrari D50 as driven to victory by Juan Manuel Fangio in the 1956 British Grand Prix.

Silverstone was the sixth round of the 1956 championship. The race would consist of 101 laps. Ferrari and Maserati were the two main contenders, and both teams sent four cars to the race.

All the Ferrari D50s were short-nose variants; Fangio’s car was painted with starting number one. Another entrant was BRM. Local team Connaught also turned up for the race, as did the French racing team Gordini. 28 cars lined up on the grid, although only 11 would cross the finishing line.

Moss in the Maserati qualified on pole, and took the lead, but he lost time when he stopped to refill with oil. On lap 69 Fangio took the lead. Shortly before the end Moss refuelled, leaving Fangio to enjoy a reasonably comfortable win. It was the first time he had tasted victory at Silverstone. His team-mate Collins finished second for a Ferrari 1-2.

The model being produced by CMC is limited to just 1000 pieces worldwide. The recommended selling price is £589.99, although as we always do with CMC, we are rounding their price down a little to £564.99.