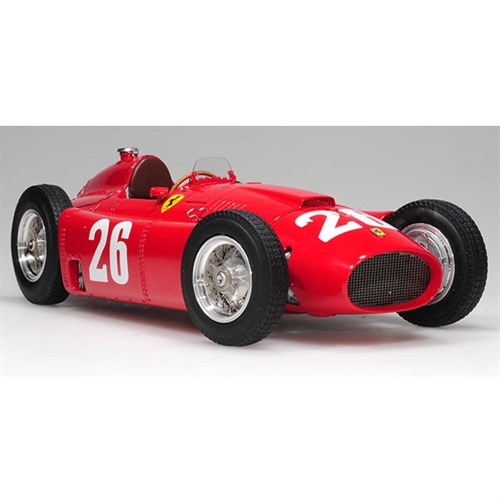 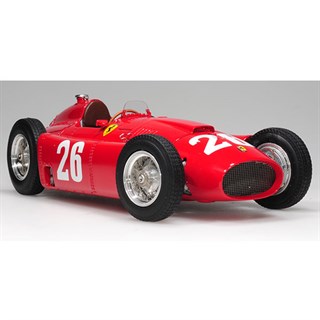 CMC 1:18 diecast model of the #26 Ferrari D50 as driven by Juan Manuel Fangio and Peter Collins in the 1956 Italian Grand Prix.

The third Ferrari D50 being modelled by CMC is the car that Fangio raced at Monza. The race took place on September 1, 1956, and it was the last round of the championship. The title could have been won by Fangio, Collins, or Behra in the Maserati. Both Ferrari and Maserati sent six cars to the race.

In practice and qualifying, Ferrari was dominant. Fangio took pole by eight tenths of a second, ahead of team-mate Collins. In the race, as was often the case, Fangio got off to a poor start. He swiftly moved back into the lead, but on the fourth lap he was overtaken by Moss.

On lap 31, Fangio brought the car in for a minor repair, but the decision was taken to send Collins out in his car, and to put the Argentinian into Luigi Musso’s car. But Musso ignored the team’s order, and kept on driving, leaving Fangio without a car.

What happened next was quite extraordinary, and testament to the sporting nature of racing in that era. Collins voluntarily decided to pass his car over to Fangio, in an act of deference to an older team colleague. No other driver in the history of Formula One has ever acted so selflessly, and it was perhaps in his mind that, as a younger man, other opportunities would come his way. But it was not to be, as he died at the Nürburgring two years later during the German Grand Prix.

With five laps to go, Moss was ahead of Musso and Fangio who, by then, was in Collins’ number 26 car. And then another exceptional act of selflessness took place. Whilst Moss was in the lead, he ran out of fuel a long way from the pits. But Maserati privateer Luigi Piotti put his car behind Moss’s, and literally pushed him into the pits.

Refuelled, Moss overtook Fangio, although the race was still being led by Musso. But Musso then had to retire, passing the lead to Moss. Moss eventually won the race six seconds ahead of Fangio. But with the points Fangio shared with Collins, Fangio took the title to become world champion for the fourth time.