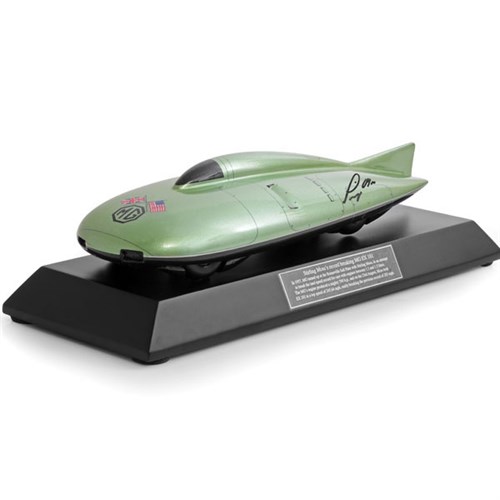 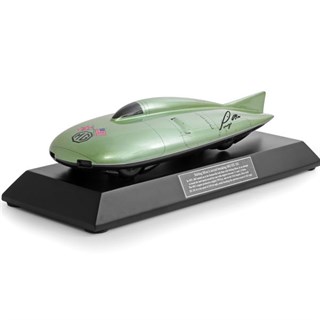 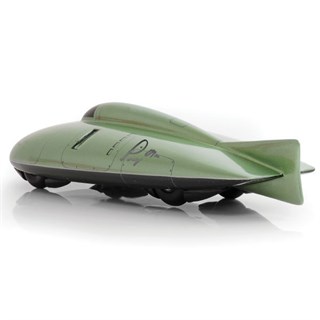 Created exclusively for us here at Diecast Legends by Bravo Delta is this exquisite, 18cm long replica of the MG EX 181 that Sir Stirling Moss took to a new land speed record on the Bonneville Salt Flats. In 1957, the MG Car Company arrived at Bonneville with the futuristic MG EX 181, and legendary racing driver Stirling Moss. The car was entered into the Class F series for cars with engines of between 1.1 and 1.5 litres. The vehicle's streamlined body concealed a 1.5 litre, twin-cam, supercharged MGA engine that had been tuned to run on 86% methanol. It produced 290hp, and on the 23rd August, Stirling took it to a top speed of 245.64mph, easily eclipsing the previous record of 203mph. Like all Bravo Delta replicas, EX 181 is hand-carved from klin-dried mahogany, using nothing but traditional hand tools. This model has received over 20 coats of paint to achieve a supremely tough finish, and all the graphics are painted and applied by hand. It's a miniature masterpiece of which we are exceedingly proud, but to make it even more special, it comes signed by the man of the day: Sir Stirling Moss.
Read more

Just seen this advertised in your catalogue and it looks like the model has the decals of MG and flags the wrong way round from the original car. This may seem a small point but at the price I would expect every detail to be sympathetic to the original. Beautiful model though.

Exquisite Model! Yes, the MG logo should be above the flags, but a minor flaw in a historical vehicle.